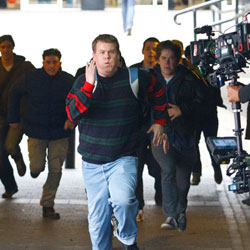 Narrative Industries Web Consultancy  (previously THBOOM!) were asked to create and control screen graphics on a handful of sets & locations in the UK, using the graphics to help tell the story.

It’s wasn’t a big job, compared to the other film work we’ve done in the past, but it was fun to be back on set with a lovely crew.

One Chance is due to be released on  25 October 2013 (UK). Some of our work even made it into the One Chance movie trailer.