Facebook launched Facebook Home yesterday, a suite of apps which take over your Andorid phone making it into a “Facebook phone”. Here’s a quick run-down of what it is, why it was necessary and what it might mean.

Facebook had a couple of problems: Not enough people were using it on their mobile phones and, when they did, they were struggling to push that “relevant” advertising to them.

They toyed with the idea of Facebook Mobile Phone  but making a Facebook-branded phone would not give the company enough reach. It would need an army of handsets to compete with HTC, Samsung, Galaxy, iPhone etc etc and, even then, why would someone sign-up to a two year contract just to get a Facebook phone?

Then they  toyed with making their own operating system (some are mis-reporting Facebook Home is an OS. It isn’t; it’s a suite of Apps for Android) but the OS space is already so dominated by Google’s Android & Apple’s iOS (US Data here) that even the mighty Microsoft and the one-time-emperor of smartphones, Blackberry, struggle to take any ground in that battle. Forking Android was an option, as many manufacturers have already personalised Google’s Android to their own devices but, again, there are issues. In order to install it, your users need to have the technical know-how to install an OS on their phone. Those of us who are technically adept enough to undertake such a task are extremely unlikely to bother doing so, if the only gain is a slightly better Facebook experience.

True, we all wanted to see a Facebook Phone or OS because it’s big and exciting and we like the shiny things but what they’ve actually done is much, much cleverer and far more likely to cane your data plan.

The answer lay in the Apps

Facebook already had apps for the iPhone & Android phones, of course but, despite a recent overhaul of iOS app, both apps were limited and widely accepted to be “a bit pants” when it came to user experience, reliability & performance. They needed something bigger than their existing apps; something that would give them the kind of user-behaviour data they need to fuel their targeted advertising machine. They needed a new idea and Facebook Home is that new idea.

Facebook is already so established and integral to some people that a small but significant portion of Facebook users already think that Facebook IS the internet. The launch of Facebook Home will only reinforce that notion.

Yes, but what is it?

The Facebook Home suite of apps is only available on Android phones and it’s just feasible that it could be the iPhone killer that apple-haters have been waiting for ( sidestepping the fact that Apple-haters often hate Facebook too ).

Because it’s running all the time and acts as your phone’s main interface it can provide a constant, always-on stream of Facebook updates & messages.  They even provided a handy diagram to explain: 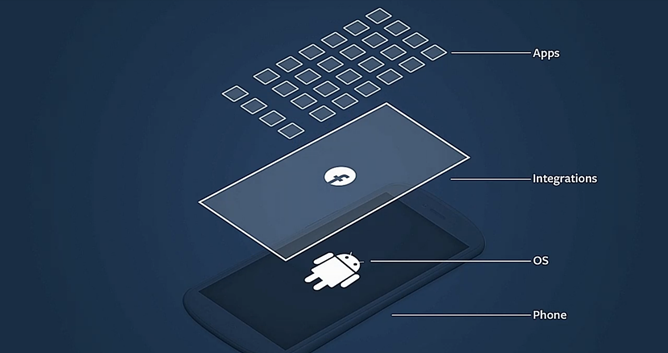 A Kick in the Googles

By taking over the android homescreen in such a fundamental way they have made a successful land-grab of Google’s own turf. It was Google that did all the ground work here, getting their OS installed on millions of phones and tablets to ensure more people used its search, maps & mail services in order to benefit from the advertising & data capture that infers. By taking over the home screen of the device, Facebook has grabbed a chunk of that space and, if it scales this idea intelligently, it could make quite an impact on Google’s business plan for the OS.

Well, break out the tin foil and make me a hat because Facebook Home is another potential cornucopia of privacy concerns. Some people are extremely bothered about Facebook having access to so much of their personal data, others are less worried, but it’s pretty clear that, in taking over your device so cleverly, Facebook can see which people’s messages you ignore, which apps you use most and (in future) possibly start tracking who you call & text the most, whose calls you ignore, what you browse & buy online and a bazillion other areas of your behaviour to feed into it’s targeted advertising and newsfeed priority algorithms. This is as clever as it is sinister, but nobody at Facebook ever said “Don’t be evil”, and it might mean that you will, finally, start to see the kind of adverts that you want. Of course it might also easily result in the messages from your lesser friends being hidden from you and whole load of other info not shown based on what your phone knows about your habits.

Facebook has a habit of ploughing ahead when it comes to privacy concerns so we’ll have to wait and see what happens there, but it’s going to be an interesting time.

Let’s be honest, Facebook Home is not a revolutionary idea but it is an evolutionary one and sometimes that’s more powerful.  Shops & restaurants have been deploying applications internally for some time, building upon existing mobile technologies to cut costs over proprietary stock-taking, ordering and other systems in the workplace ( companies as diverse as Wagamama and the Harry Potter Studio Tour guide use iPods and custom apps) but Facebook Home is a publicly available version and has the potential to make a big difference to how people use and think about their mobile phone.

Facebook Home will come pre-installed on selected devices from 12 April.