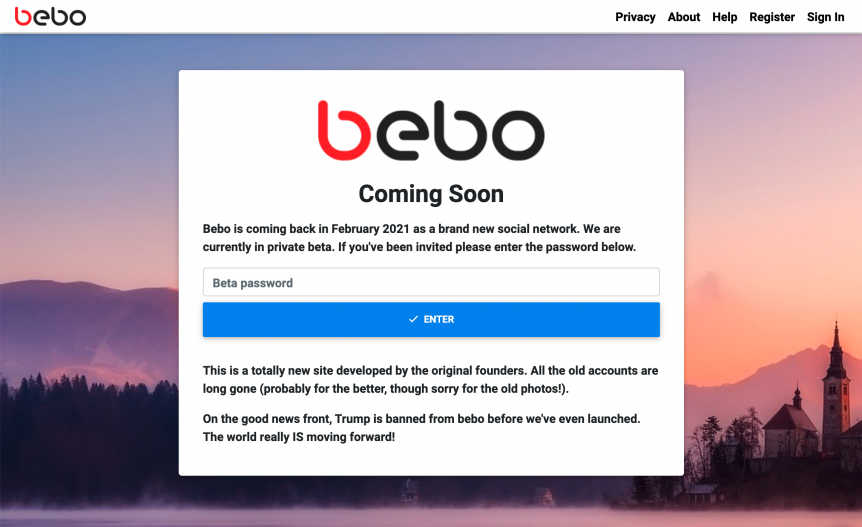 According and announcement on its website, Bebo will reopen in February 2020… and we don’t know what to think.

Back in the mid-2000s, when the modern concept of social networks was still nascent, Bebo was the most widely used social networking website in the United Kingdom. By today’s standards, the numbers may seem small but Bebo overtook the leading social network of the time, Myspace, with over 10.7 million unique users.

There was a time when the phrase “bigger than MySpace” was genuinely impressive… it’s not quite the same benchmark today.

It was exciting in its time and one of the early success stories of the social network boom. Bebo was launched in 2005 by a husband & wife team, was bought by AOL for $850million in 2008 but was it quickly went downhill and started losing the battle for audience to other social networks. By 2013 Bebo filed for bankruptcy, and was eventually bought back by the original founders for just $1million. Various attempts to revive Bebo with message & video streaming failed to gain traction, and it was bought by Amazon in 2019.

It is not yet clear what form the relaunched Bebo will take, or if it will be any more successful than its previous attempts. All we know is one of the original founders tweeted that he had been working on it during lockdown.

The social networking world has become stale & predictable of late, and it would be good to see a newcomer offer something different.

The internet has been always been social, and has always had social networks. Bulletin boards (BBS) and newsgroups were text-based and thriving communities of niche interest discussion and were used for sharing user-generated-content. The modern concept of social media is widely recognised as the point when users were given a personal profile page where they could post content including blogs, photographs, music, videos, and questionnaires/polls. As it became easier for more people to access the internet, with cheaper computers & easy availability to fast internet connections, and the always-connected smartphones the popularity of social networks exploded.