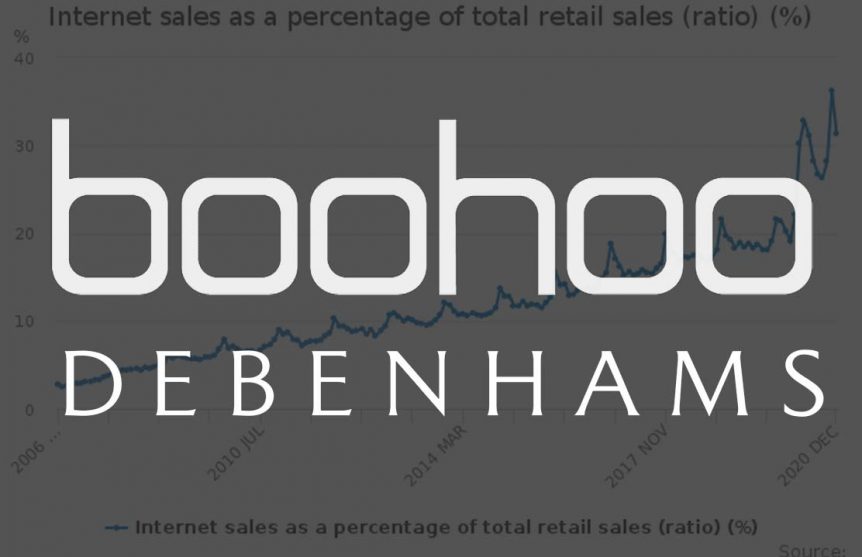 Today, it was announced that online-only fashion retailer, Boohoo, has bought the struggling Debenhams chain for around £55million. The news is devastating in many ways, but it is also a warning sign to small businesses to recognise the shift in consumer behaviour that has happened; all UK retailers need to adapt to survive.

In 2020, online retail accounted 27.9% of all UK retail, according to data from the Office for National Statistics. The single highest month was November 2020, when 36.2% of all UK retail purchases were made online.

The big shift to eCommerce is directly related to the coronavirus pandemic, but it’s a change in consumer behaviour that is unlikely to revert. Even when the stores were open in the summer of 2020, online retail in the UK remained higher than at any previous time. We may see a small decline in online retail when stores reopen, but the move to eCommerce has been growing for long time and it would be a mistake to imagine it will return to previous levels.

On average it takes 66 days for a new behaviour to become automatic, and become a habit. At the time of writing, it has been over 299 days since 01 April 2020 – first entire month in Lockdown.

In practice, though, the time it takes an individual to form a habit varies from case to case, and can be anywhere from 18 to 254 days before a new behaviour becomes automatic – but 299 days is more than enough.

April 2020 saw 30% of all UK retail purchases were made through eCommerce. That was a new record high and that percentage has not dropped below 26.3% since then.

The purchase of Debenhams, the UK’s oldest department store, by an online-only retailer (and rumours of ASOS making a play for Arcadia Group) it is undeniable that UK consumers have adopted eCommerce as their preferred choice. They have been doing it long enough for it to become habit. And even after the pandemic recedes, we are not going to see the exodus back to physical retail that many small business owners were counting on.

The shift in consumer behaviour has happened; UK retailers will have to adapt to survive. But that’s not to say there isn’t hope for physical stores.

Our town centres & high streets have been in decline for years, particularly the homogenous ones that had stop reflecting the character of their local population. Many town centres had ended-up fighting neighbouring towns over who had the best M&S or Primark. A battle they lost to out of town retail parks which had larger stores with ample, convenient parking.

Before covid & lockdowns, the town centres that were more unique, with more independent stores, struggled less.

Perhaps this is a chance to reflect, and an opportunity for local people to reclaim town centres, and allow them reflect the character of our towns again.