You know what it’s like: You’re browsing on your smart phone and see a link to something really interesting; you click it and, suddenly, you’re redirected to a cut-down mobile site that refuses to show you what you were looking for. Frustrating isn’t it? Well Google thinks so too and is taking steps to discourage site owners from doing it.

It’s shouldn’t be news to you that Adaptive & Responsive Web Design are almost essential elements of your businesses’ web strategy, if you want to reach customers on mobiles & tablets, but it seems that Google is now going to become a lot more active in supporting sites that work properly with multiple devices.

As of June 4th Google will start rolling out a new feature discouraging some of the common, lazy methods that some websites use when dealing with smart phones. if Google detects, for example, that a user is on a smart phone and that a website might lazily redirect them to the homepage of the mobile site, rather than the actual page they were trying to access, then a pretty stark warning is going to be shown: 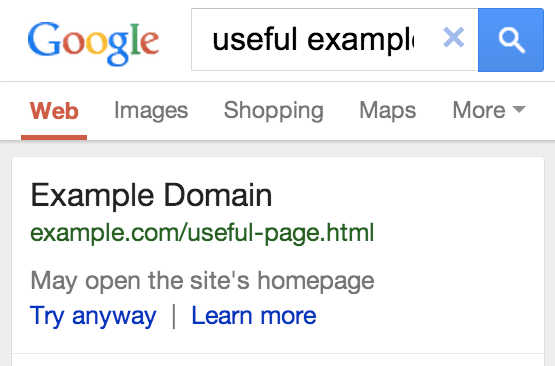 Note the comment “May open the site’s homepage” for sites that don’t properly support smartphones/tablets.

Right now it is US and in English only, but this feature will probably roll out to other countries in the near future and may be an indication that Google will take further steps to encourage site owners to implement better handling of smart phones, including the impact of multiple device support on search engine ranking.

It may be time to look at your web strategy and assess whether or not your website is doing the right thing for multiple devices.